I thought it would interest you all to know that you are not alone. There are claustrophiles everywhere. It is in their nature to stay in the closet where it is dark and close and quiet but, through the tap tapping of hands on wood, through semaphore and paper trails, we come to hear of them. Nice Spread would like to welcome Isaac Asimov to its ranks.

Asimov, of science-fiction fame, was a claustrophile. In his autobiography he recalls a childhood desire to own a magazine stand in a New York City Subway station, within which he could enclose himself and listen to the rumble of passing trains while reading. We can’t think of anything nicer. 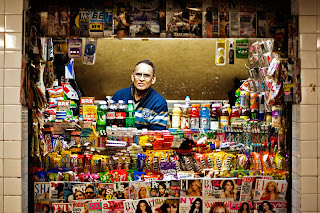 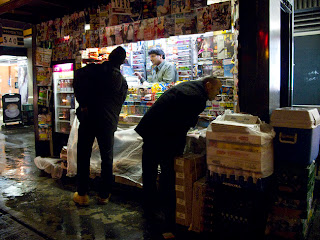 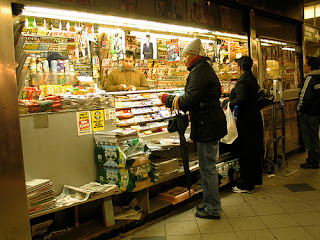 Please send us any of your photos from the day! spreadnice@gmail.com

A MASSIVE thank you for everyone involved and to everyone who came-
....watch this space for news of the return of NICE SPREAD.... 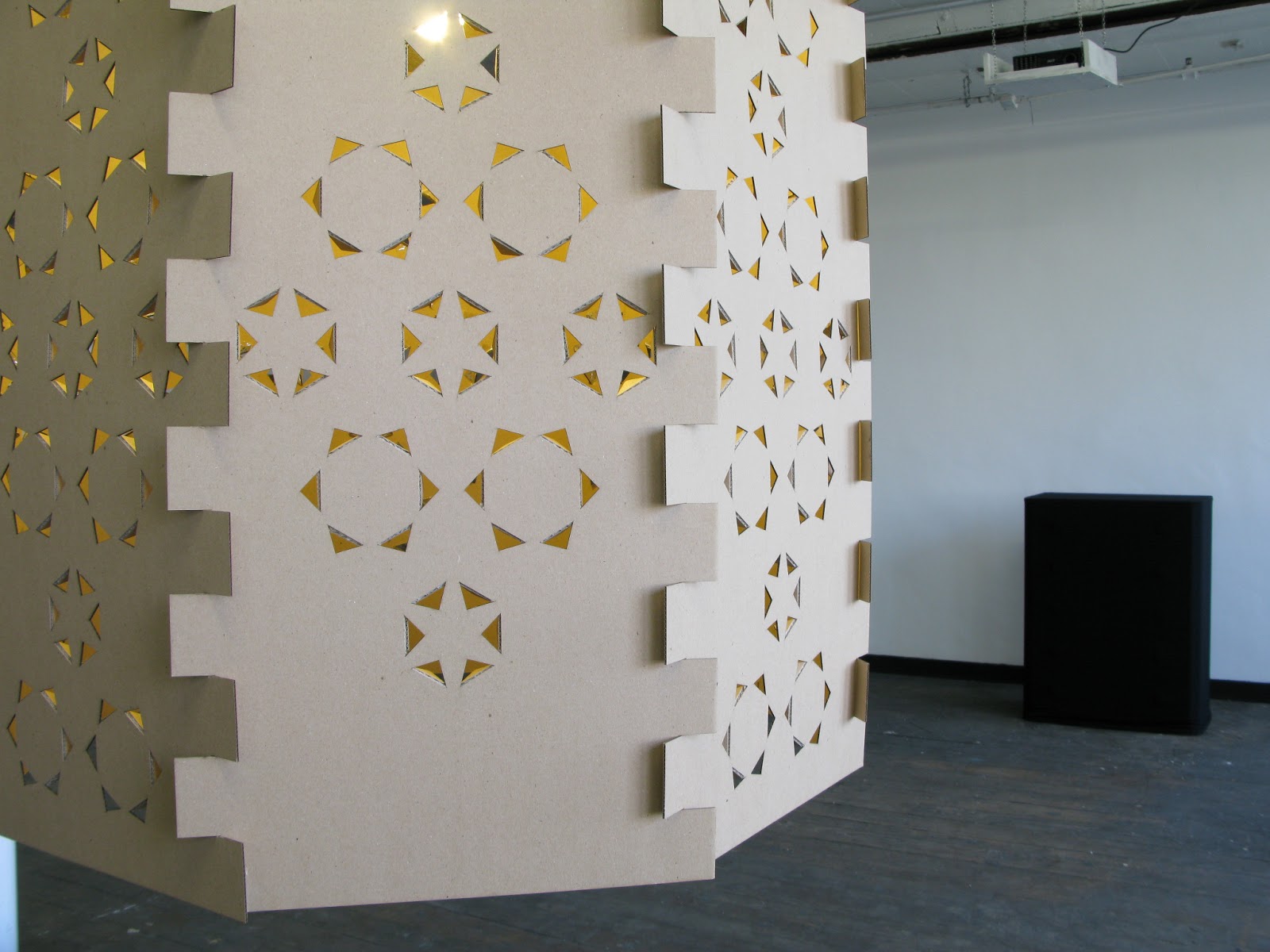 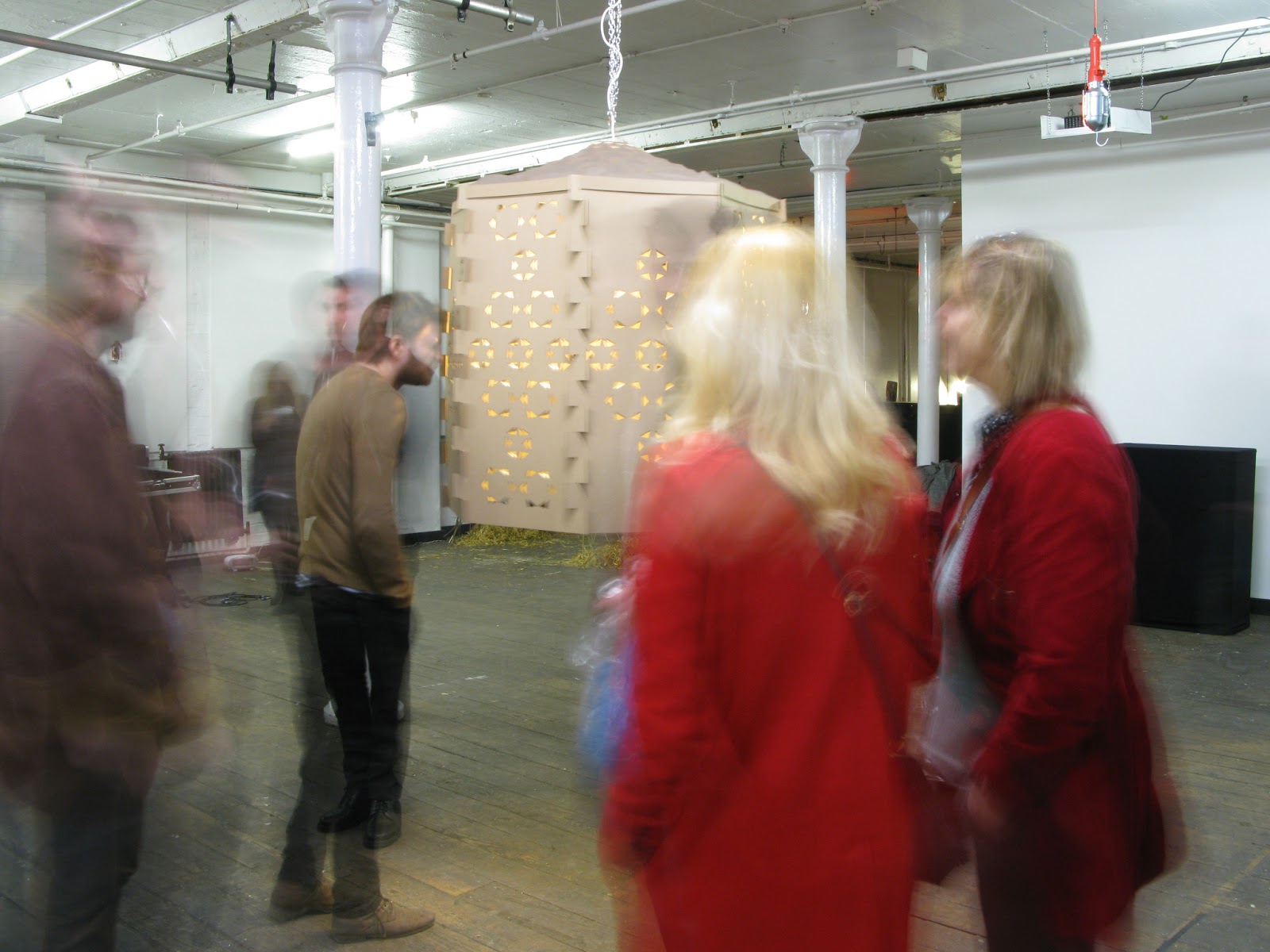 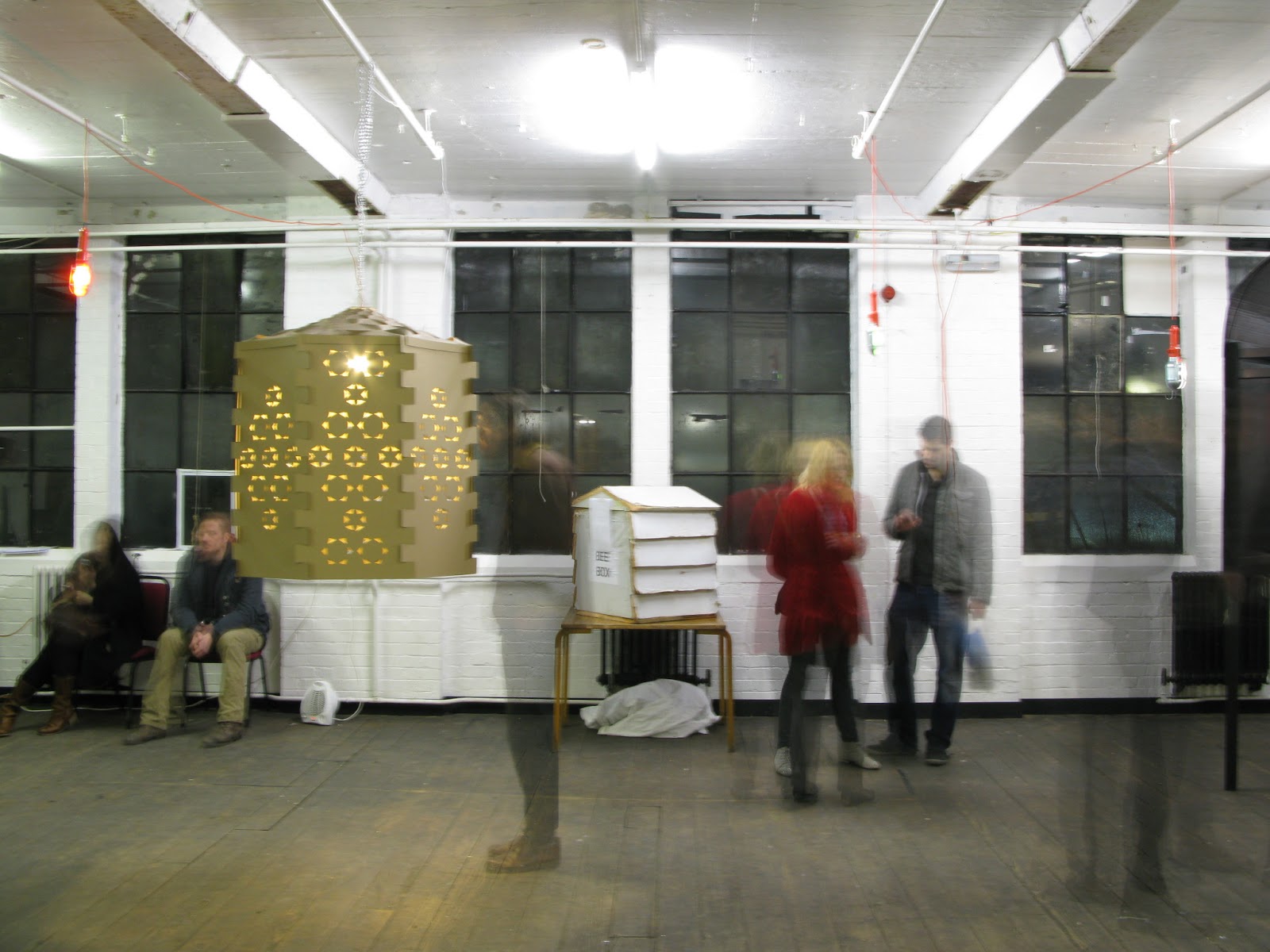 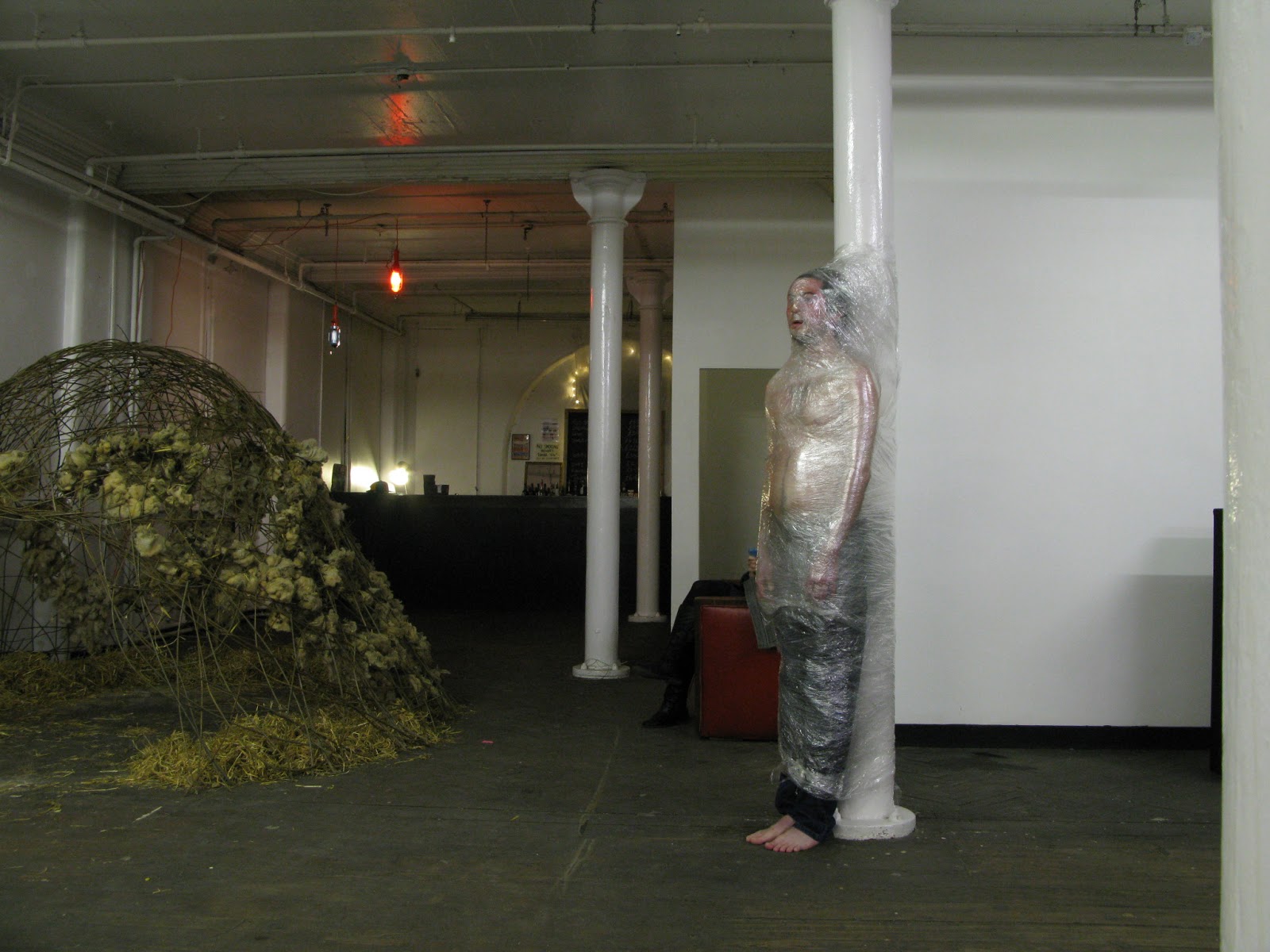 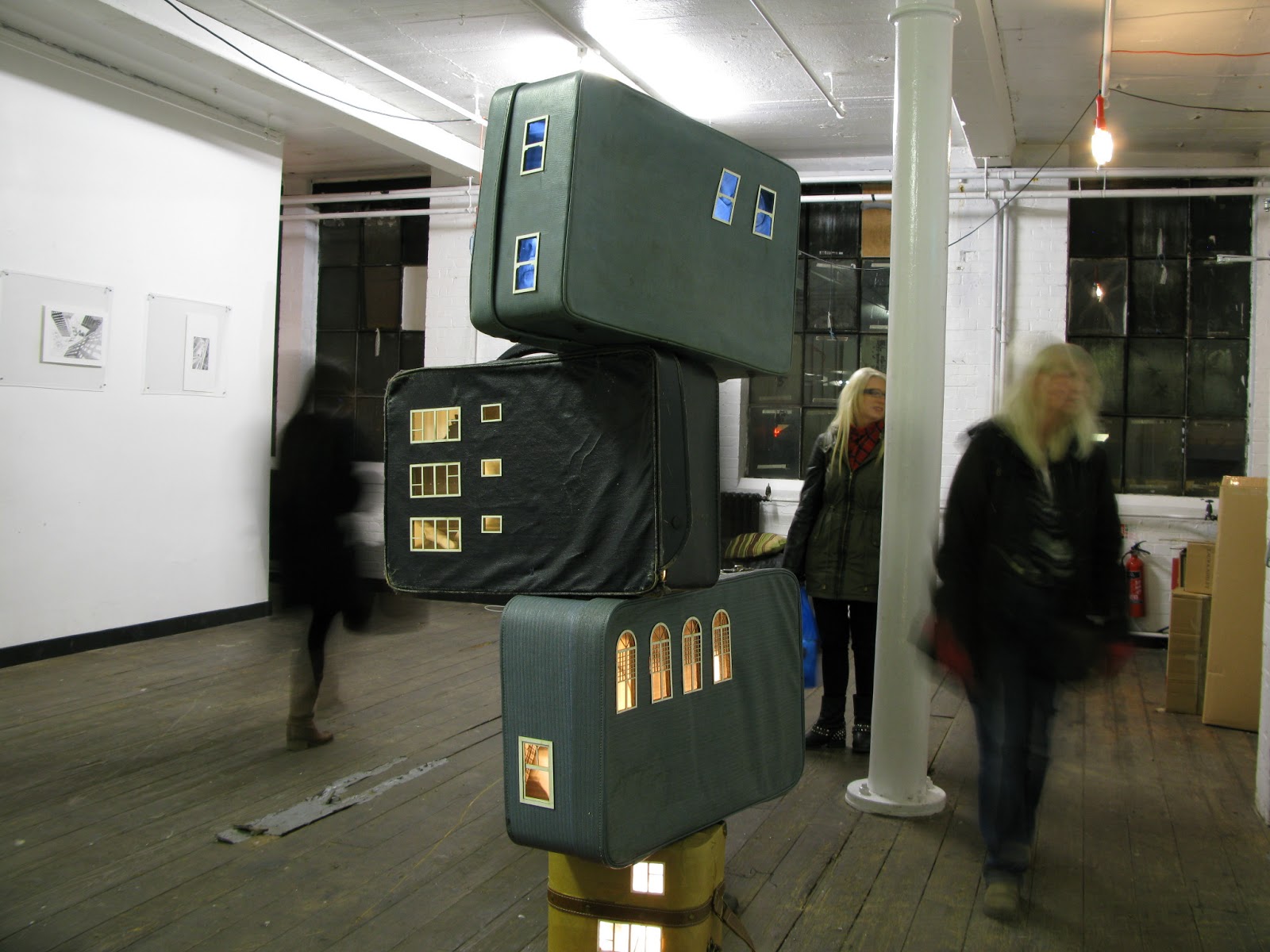 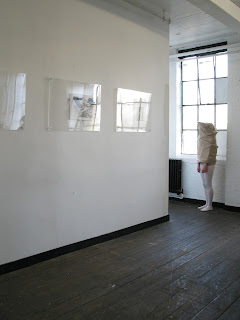 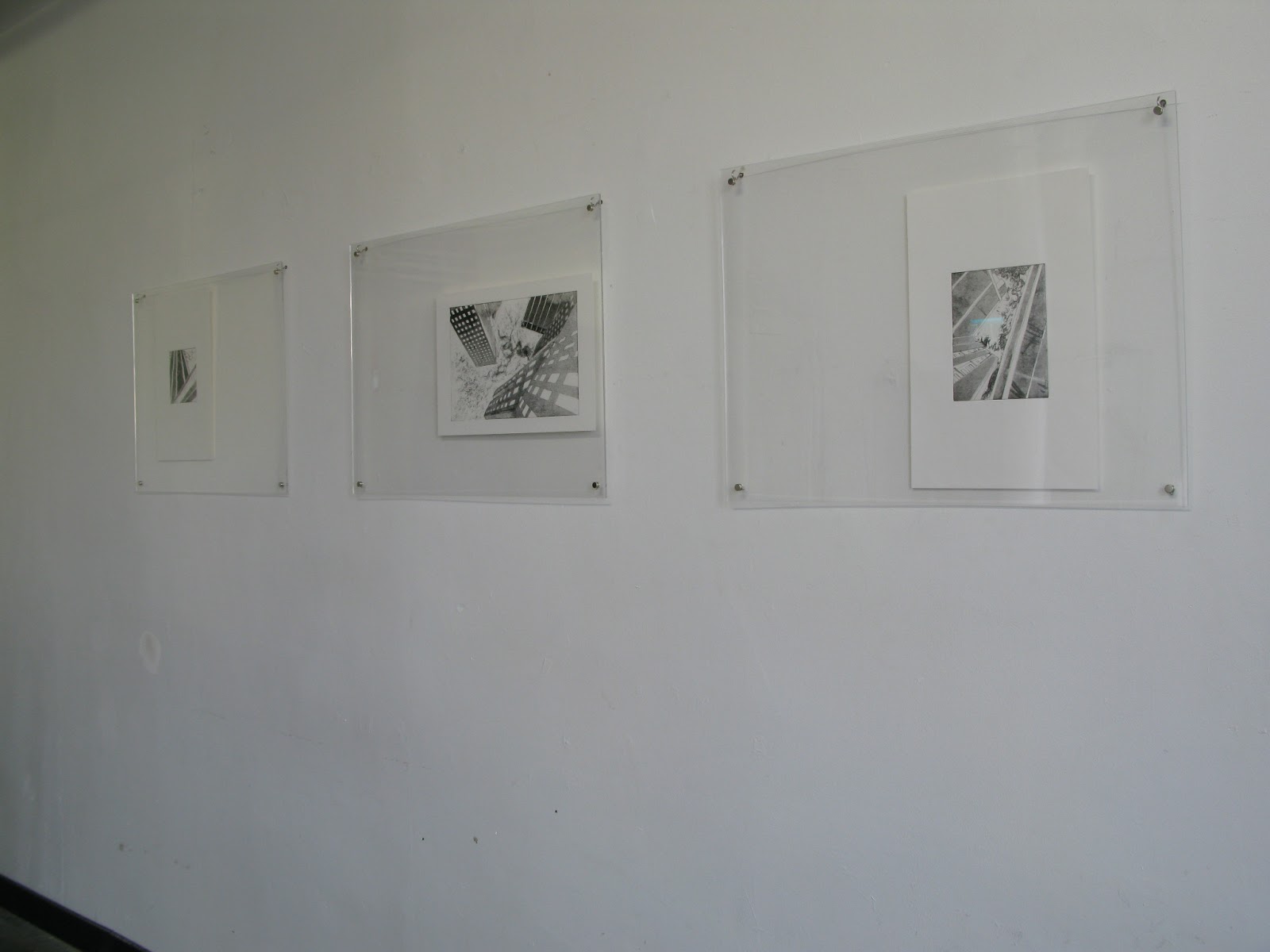 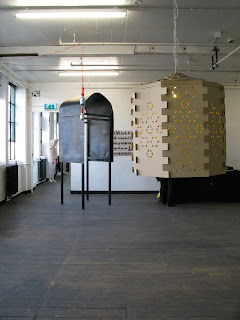 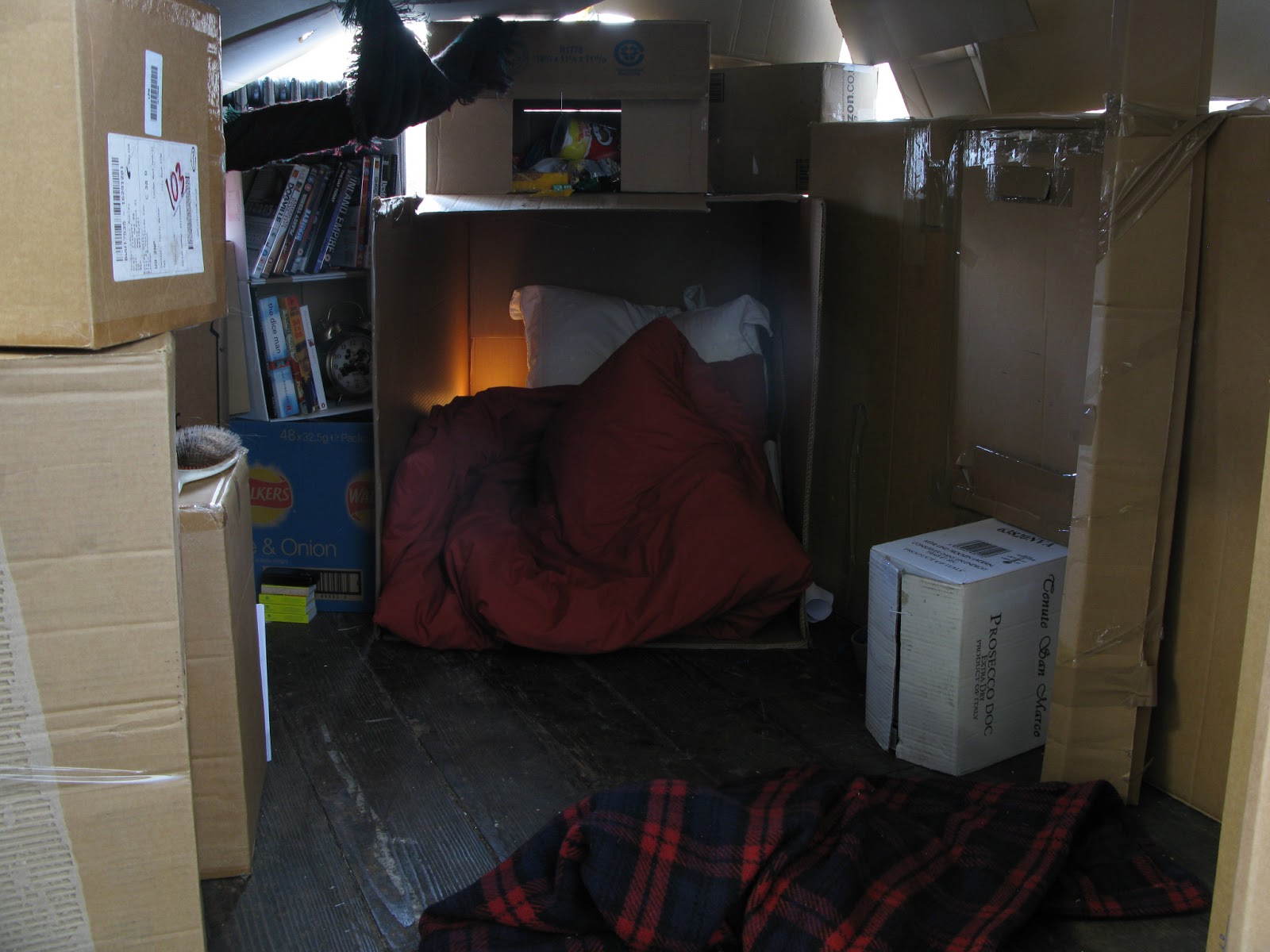 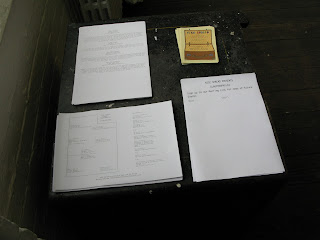 Rob Gallagher is a London-based writer and illustrator. His work has appeared in The Observer, Nyx and Let Them Eat Cake.

Laurence J Horstman is a musician and sound designer with an interest in collaboration. Catch him DJ at the Field Work parties in South London (www.fieldworklondon.com).

Daniel is a writer and doctoral student living in London
Posted by Nice Spread at 08:40 No comments:

Ed Attlee
An Introduction to Agorophobia

Ed is a writer and researcher currently undertaking a PhD at the London Consortium. She is writing about dream spaces, laundry practices and the space of the home. She has written for Time Out, Intelligence Squared, Gut and Kicking Against the Pricks and has had poetry published in Poetry & Audience and Trans Script. She is co-founder of Nice Spread.

Octavia has a BA in Hispanic Studies from University College London, and an MPhil in European Literature and Culture from the University of Cambridge. She taught English language and culture at the Sorbonne in Paris, before returning to London to start her doctoral studies back at University College. Eroticism, visual art and the surreal have been consistent themes throughout her work, and although based in the Spanish department, her approach is consistently interdisciplinary. Her thesis focuses on eroticism in the films of Luis Buñuel, Pedro Almodóvar and Julio Medem.

Andrea Vesentini
The House of Anxiety: The Frontiers of Domestic Inner Space in Suburban Post-War America

Andrea is a PhD student in Humanities and Cultural Studies at the London Consortium (Birkbeck, University of London), where he is currently researching suburban interior spaces in postwar America and their relationship with the outdoors. His project brings together architecture, film and popular culture. He graduated in American literature and culture from the University of Venice Ca' Foscari and studied at the Sapienza University of Rome, Georgia State University and the City College of the City University of New York. He is also a film critic for online magazines, and worked at the 2011 Venice Art Biennale curated by Bice Curiger.

Alex is an Artist/Animator specializing in 2D cell animation. His work often refers to personal history while also addressing themes of lurid expressionism and animated documentary. Reference to mental illness is present in much of his narrative work. The film Patients is a semi-autobiographic animated documentary which draws heavily on his experience of being sectioned during an episode of psychosis. The film took context in an anti-stigma campaign and was based on the premise that an accurate depiction of something strange and unfamiliar, such as psychosis, may help an audience develop empathy towards those who have been affected by it. Alex works from Sage Community Arts Space, an art therapy charity, where he has a residency.
Posted by Nice Spread at 08:31 No comments:

The Nice Spread Collective present their first experiment in space this month with a one day exhibition/investigation/party focussed around the topic of claustrophilia.

Claustrophilia is defined as an abnormal desire for confinement in a small space; the desire to close windows, doors and drawers.
Come to see work which responds to these and other spatially sensitive urges and which asks questions about the way we interact with space in modern life.

Expect talks, performances, installations and artwork followed by an evening of music and dancing.

Ed Attlee An introduction to agoraphobia,
Octavia Bright Spaces of Violence in Pedro Almodovar’s The Skin I Live In
Alex Widdowson Psychosis and Hospitalisation,
Andrea Vesentini The House of Anxiety; the frontiers of domestic inner space in suburban post-war America,

Here is the Flyer! 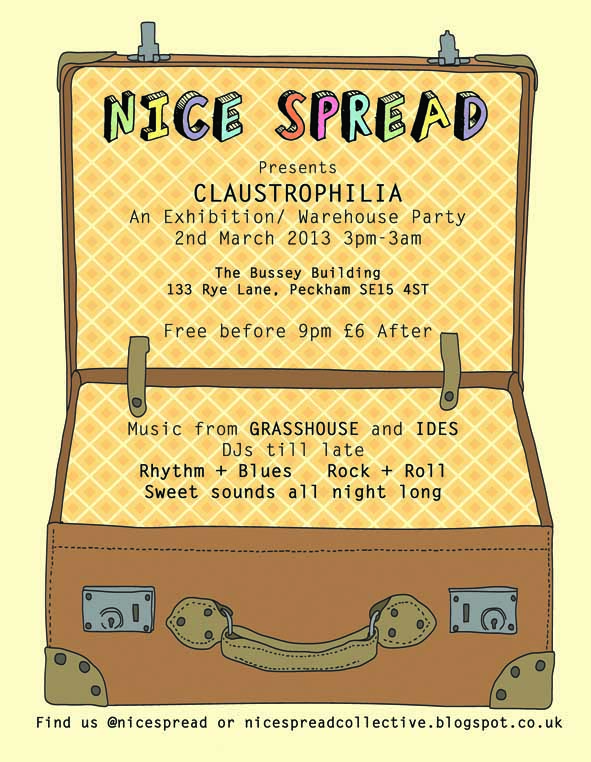 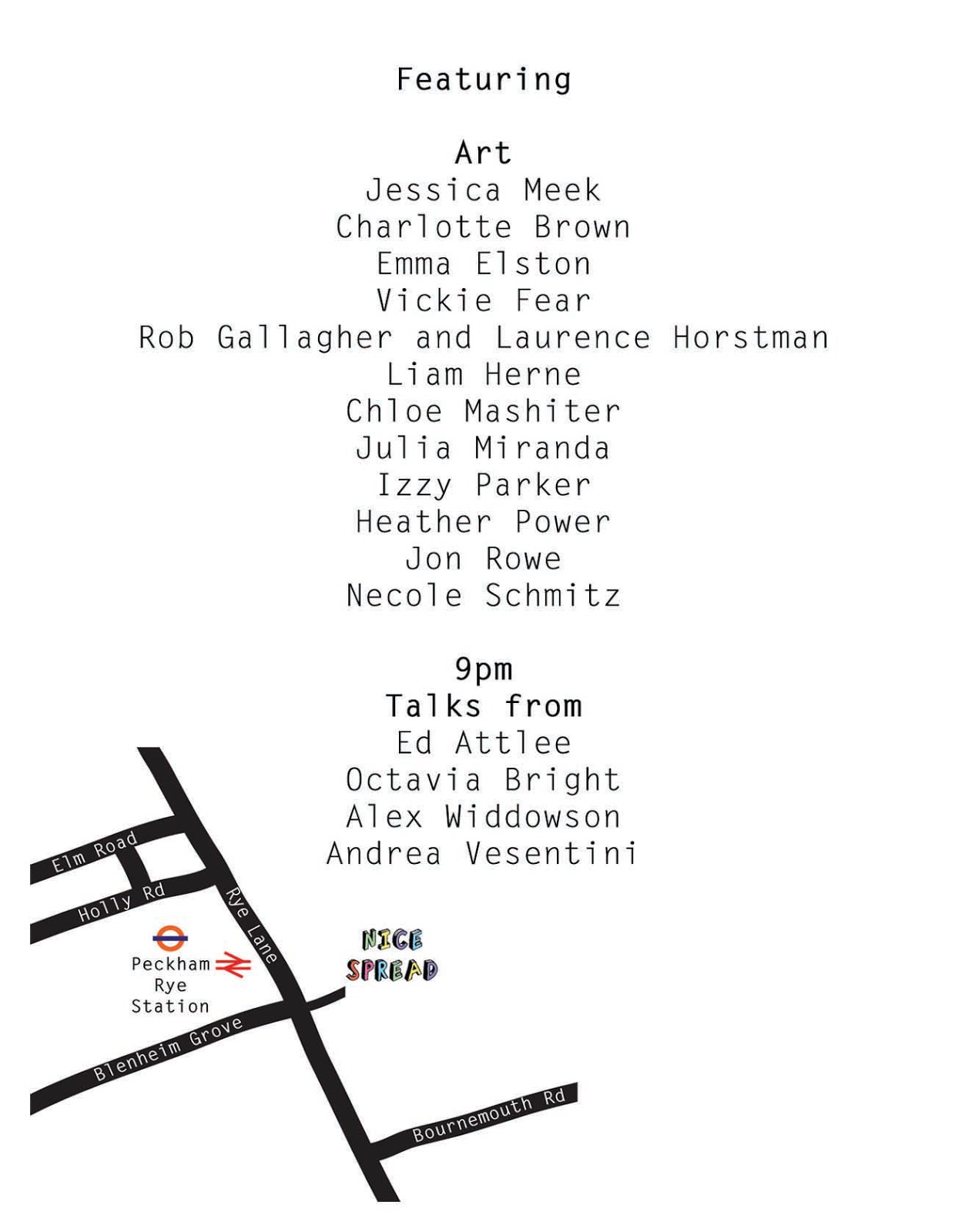 Here are a few more brilliant artists to add to our collection...

Julia Miranda is an East London based painter working intuitively with found materials to investigate relationships between people and spaces. Her approach is predominantly abstract and her conscious concern is with the formal elements of a piece. But in her re-appropriation of wallpaper, bed-sheets and slate, ambiguous narratives unfold, and figures emerge. Julia is currently preparing for collaborative projects in New York and
London and building a new body of painted objects for a solo show at The
George Gallery, Hackney, May 2013.

Izzy is a material inspired designer-maker investigating the physical and emotional relationship we build with non-digital objects and with each other. She enjoys exploring the vast potential of material, from metal to glass through to vegetable matter. Her objects encourage the user to explore their perspective of the everyday.
Izzy graduated from three-dimensional design: materials and critical practice BA at Camberwell College of Arts in 2007. She has since worked with leading interior designers, design fairs and jewelers. She is currently at the Royal College of Art completing her Goldsmithing, Silversmithing, Jewellery & Metal (GSM&J) Masters.

The Effort Collective is a DIY arts organisation with a track record of creating interactive live art events as well as producing theatre, short films and music. Jon is a resident filmmaker of the collective who is now also exploring other art forms.

We'll be announcing the speakers soon...watch this space!
Posted by Nice Spread at 10:48 No comments:

We are pleased to confirm our first seven artists....

Jessica Meek studied textiles at the Royal College of Art. She creates geometric mixed media installation pieces with a focus on material combinations- hard and soft, natural and synthetic with processes both digital and hand-rendered to create an unexpected, unique aesthetic. She is co-founder of Nice Spread.

Charlotte Brown studied at Goldsmiths and the Royal College of Art. She lives and works in London. Her work has been exhibited internationally and resides in private collections.
Her practice is object based, often intimate in scale and explores invested objects. She is currently using traditional techniques of casting and stitching to address innate human
experiences. Recent pieces have been made of lead, combined with knitted and embroidered silk and cashmere, and a series of etchings.
Much of her work is informed by a reading of Freud’s writing. She employs found objects that have undertones of the bodily, of use, of everyday intimacy, as fetishes and relics.

Devon based artist Vickie Fear uses live sculpture to explore the crossovers in performance and sculpture, whilst blurring the boundaries between comfort and discomfort, the hidden and the exposed, stillness and movement. Vickie is one of the current artists in residence at Plymouth University, where she has been focusing on the fine line between protection and restraint and working on two live sculptures, including the new work she will be presenting at Nice Spread. Born in Bath Spa, Vickie studied Fine Art & Visual Culture at the University of the West of England, Bristol and has performed at The Bluecoat in Liverpool, Arnolfini in Bristol and as part of Hazard MMX in Manchester. Vickie is also Co-Director of Hand in Glove, an artist led group, which organizes, curates and supports events and exhibitions in and around Bristol.

Liam Herne is an artist from Watford, Hertfordshire who predominately works in performance, photography and video. He has shown his work in various locations over the UK. He currently works as an Art teacher in Hertfordshire and is studying an MA in Fine Art with Learning & Teaching in Higher Education at Kingston University.  At Nice Spread he will be showing the lastest of his Wrapped Up series.

Chloe is a performer, writer and director with a particular interest in immersive and interactive theatre. 'Fortress' is her second interactive installation, following 'Faithful' at Open Arts Cafe this February. She has performed at Latitude Festival, the National Student Drama Festival and Edinburgh Fringe Festival, and with companies such as Future Cinema and Paines Plough. Her writing has been featured as part of the International Student Drama Festival and Lost Theatre's 5 Minute Festival. Chloe's directing credits include a Japanese tour of Twelfth Night and an original adaptation of the book Zombie Haiku; she also recently assisted on 59 Minutes to Save Christmas, Slung Low's interactive adventure around the Barbican Centre.

Heather's work dwells in the city - exploring the urban environment and drawing upon its visual and material language. Her work aims to instigate dialogues about the city and our interaction with its spaces in relation to sculptural practice. Heather was born in Lima, Peru but lives and works in London.

Necole's work involves using the body to inscribe and experience spaces.  This began with a desire to find a safe and confined space with in the public space of the gallery.  In past works she sought to create an encounter between herself, as the artist, and the spectator in space, through the mediation of technologies such as video and audio recording.  Using these technological devices within a constructed space to frame the interaction, her work seeks to generate a complicity in the interplay of subjectivities of maker and viewer.  This intimacy seeks to both replicate and reinforce the intimate nature of the space in which the encounter takes place.


It's shaping up to be a really great show....and there are more to come!! picture from designboom.com
Posted by Nice Spread at 04:17 No comments:

We have lots of exciting proposals so far, keep them coming!

Don't forget, we are also looking for people who want to do something live in the space- performance art, talks on/around the topic of claustrophilia, contortionists, anything involving the audience.

This is a really open brief and we encourage you to be as bizarre as possible.
Posted by Nice Spread at 04:03 No comments: